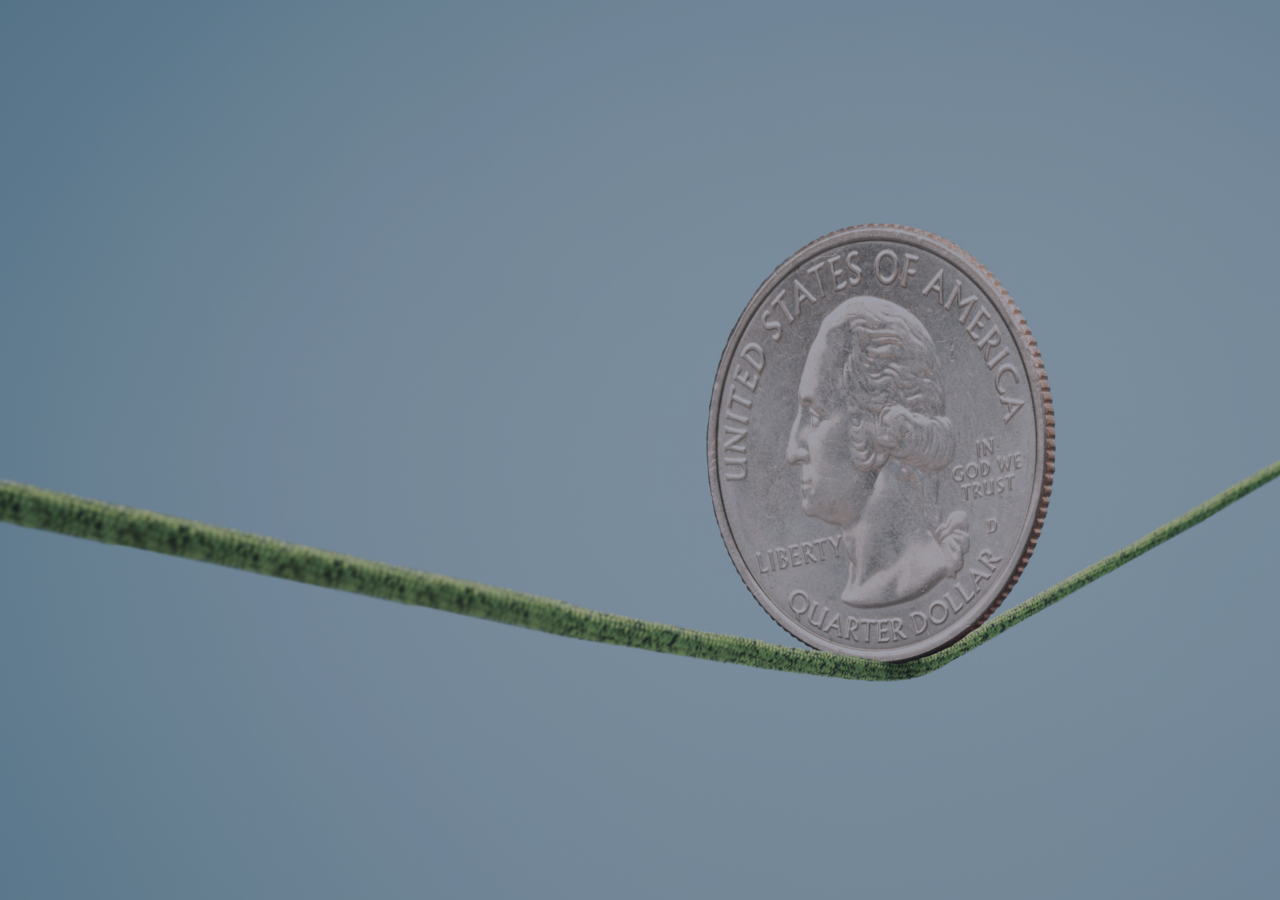 Margins were already tight before the pandemic for a sizable manufacturer of pipes and tubes, and its business was further challenged when efforts to re-open a plant it had shut down during the COVID crisis were hindered by supply-chain issues. The final blow came from skyrocketing prices of raw materials last spring. The company defaulted on its senior loan and entered into forbearance with its lenders.

A company with more reasonable leverage—the pipe company’s was 5.5 times debt to EBITDA when it closed its senior loan just before the pandemic hit—could have better handled those bumps in the road. As business globally gained momentum, lower leverage would have provided the company with more time for supply costs to settle or to find less costly suppliers, as well as to negotiate higher prices with customers.

Many middle-market companies, without the Fortune 1000 companies’ ready access to inexpensive liquidity, face similar challenges ahead. In fact, producer prices have increased faster than consumer prices over the last year, a trend likely to squeeze further middle-market companies’ earnings and adversely impact their leverage ratios, making it ever harder to keep lenders at bay.

This year’s rapid recovery, with U.S. GDP growth anticipated to exceed 7%, will certainly help many. However, leverage has been climbing for a decade, and while it dropped last year when lenders tightened their spigots, first-quarter numbers indicate it is climbing again.

This puts middle-market companies on a precarious path. Lenders have waived or loosened financial markers on existing debt, and they are continuing to offer so-called covenant-lite transactions. That has enabled companies to kick the proverbial can down the road in terms of reducing their leverage and strengthening their finances. However, pre-pandemic companies were operating in a deflationary economic environment, enabling them to keep costs low and maintain robust profit margins.

In the wake of the pandemic the tables have turned. Today, supply-chain issues, rising raw material prices, and government spending at an unprecedented rate are fueling inflation, another factor that will increase production costs while pinching customers’ wallets. As a result, more middle-market companies will end up walking a tightrope, running out of cash, and breaching loan covenants, leading to more defaults in the months ahead.

From Deflation to Inflation

Inflation since the 1980s has bumped around but trended ever lower, especially since the 2008 Financial Crisis when it has rarely exceeded 2%. However, since the $1.9 trillion American Rescue Plan was signed into law March 11 by President Joseph Biden, inflation has skyrocketed, leaping 4.2% in April over the previous 12 months and 5% in May. Continuing the trend, the Labor Department’s Consumer Price Index (CPI) rose 5.4% in June and again in July—the highest 12-month rate since 2008 and topping all forecasts.

In July, the CPI climbed a seasonally adjusted 0.5% from the month before, significantly lower than the 0.9% increase in June over May. That suggests a cooling, although it is much higher than the average 0.2% rate over the last 20 years.

Policy makers have described the inflation spikes as temporary, but the longer they continue the more likely higher prices will remain. Rising prices for lumber and other commodities in the spring have been one factor, and while some backed off June highs they remain up historically. The World Bank’s Prospects Group notes in a recent blog that metals and agriculture prices are up significantly from before the pandemic. In fact, agriculture prices hit a seven-year high in April, increasing more than 9% in the first quarter alone.

Agriculture prices are expected to stabilize in 2022 following a 13% increase in 2021, according to the blog, which does not foresee those prices falling. It notes metal prices also exceeding pre-pandemic levels.

“The proposed infrastructure bill in the United States and the global energy transition towards decarbonization could generate additional upward pressure on prices,” the report says.

The Biden Administration’s infrastructure packages will likely further fuel inflation, as more money pumped into the economy increases demand and in turn prices in markets ranging from retail to housing to securities. Even if Democrats only partially succeed on that front the price increases are already baked into many companies’ plans.

Indications That Inflation Will Last and Fears of Stagflation

Consumer products giants Kimberly-Clark and Procter & Gamble have each announced plans to raise prices soon, due to higher commodity and transportation costs. In April, Whirlpool CFO Jim Peters told Yahoo Finance that the company increased prices on its appliances globally between 5% and 12%. Prices at restaurants have also increased significantly.

In response to price increases, asset-management-giant Blackrock recently announced increasing base salaries by 8% starting in September for all staff at the director level and below. In an interview with Bloomberg, CEO Larry Fink said inflation will bring about “epic change,” and while not yet a cause for concern it is not as transitory as market strategists have assumed.

Such salary increases are unlikely to be reversed anytime soon, and neither are rents, which tend to take up significant portions of renters’ income and rose 13.8% through Aug. 31, 2021, according to Apartment List.

Whether the Federal Reserve acts sooner than expected to tame inflation is an open question. However, the central bank prioritizes maximizing employment, and Fed officials believe dramatic price increases stemming from supply-chain snafus and economic-reopening issues are temporary. Thus, rate hikes are unlikely to occur this year, but the Fed’s inflationary outlook has two thirds of Fed members anticipating at least two rate hikes in 2023, and seven of the 18 members see rates rising as soon as next year.

August’s nonfarm payrolls rose by a seasonally adjusted 235,000, much lower than expected, but averaging 586,000 monthly for the year, and the unemployment rate fell by 0.2%, to 5.2%. Such numbers, if they persist, could prompt the Fed to act sooner. However, variables such as the Delta variant of covid-19 that is rapidly increasing infection rates and deaths could dampen job growth and stall Fed action to tame inflation, while prices continue to rise.

That could lead to the return of painful stagflation, prevalent in the 1970s. In an Aug. 11 article in MarketWatch, Alan McKnight, chief investment officer at Birmingham-headquartered Regions Bank expressed the growing concern about stagflation, in which growth lags while inflation continues to rise.His team anticipates gross-domestic-product (GDP) growth outpacing CPI growth this year and to a lesser extent next year, keeping stagflation in check. Given the risks, however, he said his firm has reduced its exposure to large-cap stocks and broadly cut its fixed-income holdings, given expectations of ongoing inflation.

Those ratios increased significantly in 2020, as a result of federal government aid and loan-payment deferrals. Companies with between $201 million and $350 million in debt actually saw their interest-coverage ratio bump up in the first half of 2021, on average, compared to last year. However, larger middle market companies’ ratios have dropped considerably. They’re still significantly higher than interest-coverage ratios in 2018 and 2019, but companies who did deals in those years will face an even more daunting tightrope to navigate.

Even if borrowers don’t take on more debt, rising commodity prices will squeeze margins as the cost of goods sold increases, resulting in EBITDA falling and leverage increasing.  Indeed, the Bureau of Labor Statistics reports that the Producer Price Index has moved up 7.8% for the 12 months ended in July. That’s the largest 12-month advance since the data were first calculated in November 2010, and it is significantly higher than the CPI’s 5.4% increase, a combination sure to pressure profit margins.

The combination of increasing leverage, rising interest rates, and inflationary pressures increasing wages and supply costs, will put many middle-market companies in dire straits. Fortune 1000 companies have the pricing power to increase margins by asking more for their products, but middle-market suppliers often do not have that luxury when selling to their big corporate customers. Plus, they may lack the market power to push back on their own suppliers seeking price increases.

Consequently, many firms will have to navigate a much more difficult path on reduced gross margin. They will have to execute their businesses flawlessly despite—as the past year and a half have clearly illustrated—the likelihood of unexpected hiccups. The rivalry between the U.S. and its biggest supplier, China, shows no signs of abating. And new Covid variants are prompting lockdowns in countries such as Australia--previously standouts in controlling the pandemic—and continuing to wreak havoc in India, Brazil and other countries important for supplies or sales.

Middle-market companies are increasingly buying supplies globally, and in several cases plants in places like India had to shut down completely in June and July due to a dramatic rise in Covid infections, interrupting critical production. The Wall Street Journal recently reported the Delta variant already impacting a range of businesses in the U.S. and prompting some companies to reign in profit projections.

In fact, as the sudden emergence of Covid made clear, any number of unanticipated events could eat into corporate profits. Currency volatility, for example, could imperil middle-market companies active abroad, whether selling products or buying supplies, since hedging that risk may not be possible or too expensive.

By way of example, a U.S. middle-market company signing a contract with a European manufacturer to buy a machine for €1,000,000 must convert $1,176,471 USD to Euro, when the USD/EUR exchange rate is 0.85,  to pay the agreed upon price.  If at some point during the production of the machine the exchange rate moves to 0.80, then the middle market company would need to convert USD $1,250,000 for the same €1,000,000 purchase.  Middle-market companies without the capital to properly hedge those types of risk could experience further margin pressure.

In fact, many in corporate management today have only known a business environment with low inflation and low interest rates, enabling their businesses to post profits despite ever higher leverage. No longer, and given the likelihood of unexpected obstacles ahead, even with a recovering economy they will face major challenges guiding their companies on what is likely to be a precarious path ahead.